The new vYacht's Wifi Router is the 3rd generation of this popular device. The router brings marine instrument data to iPad and on-board computer. It creates a wireless network via a shared access point to distribute your GPS position, AIS and other information. Multiple clients can connect to the same wireless network. 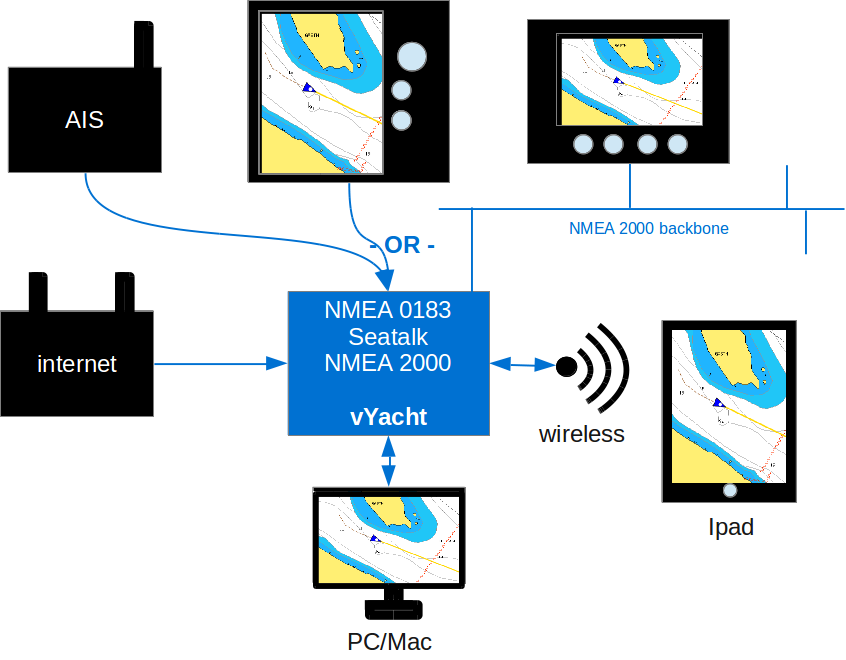 The router understands most protocols used in the marine industry: NMEA 0183, NMEA 2000, Seatalk NG and Seatalk 1. It is also able to receive and transmit TCP data and UDB broadcasts.

Seatalk, NMEA 0183 and NMEA 2000 input data will be logically combined (multiplexed). Seatalk and NMEA 2000 data is automatically converted to NMEA 0183 sentences understood by most iPad, Android and PC software such as iNavX or iRegatta.

The data provided by these devices is automatically distributed in a secure way via WiFi using UDB broadcasts or TCP. Optionally cable bound ethernet is The vYacht's Wifi Router III supports marine charting software like iNavX on the iPad or PC based navigation software. GPS/AIS, depth, log and wind in iNavX and iRegatta

iNavX and iRegatta are only two out of many applications that are supported by the vYacht Router. The standard and cheaper iPad Wifi does not come with a GPS. If you still want to use it for navigation the Wifi router is the perfect option. Even if your iPad supports GPS: AIS or depth, wind and speed displayed in one place increase security and allow faster and better decisions.

Inputs to the vYacht's Wifi Router III are isolated to avoid ground loops and signal noise. They also provide over-voltage protection. NMEA data or NMEA and Seatalk data from both inputs are multiplexed. Many sailors have internet available on board already. Via an optional ethernet input internet connection can be routed as well. This means that you connect the router, continue using the internet while receiving instrument data without changing the network connection.

Many users of the vYacht Wifi Router use iNavX. iNavX allows to transfer waypoints from iNavX via the vYacht Router back into the boat network.

Just plan your route relaxed on deck and feed them back into your plotter for further navigation. Different versions for different needs

The NMEA 2000 Gateway will translate all known NMEA 2000 sentences to NMEA 0183. These are then available via Wifi. This way iNavX, iRegatta and all the other software will continue to work even when you upgrade your system to NMEA 2000. Seatalk to NMEA 0183 Bridge

If you choose the Seatalk version of the vYacht Router a Seatalk to NMEA 0183 bridge is already included. Seatalk sentences will be converted to the corresponding NMEA 0183 sentences. NMEA 0183 is then available via Wifi and on the NMEA 0183 output. Control your boat from iPad

The router has an optional ethernet WAN port which allows to connect 3rd party routers. This way the router can handle instrument data and you can surf the web. A new features is also the still experimental USB port to connect a 3G/4G dongle straight to the vyacht router and share your internet like at home.

SignalK is a relatively new protocol used to connect marine instruments to the web. SignalK cames with a lot of great new features built by the boating community. Its open source just like the vyacht router and enables even easier access to boat data. 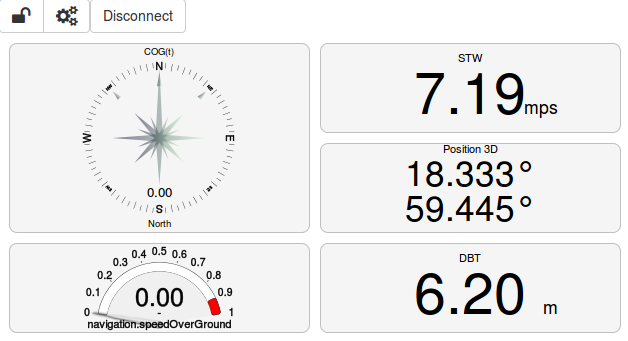 Many boat owners are handy and appreciate the hackability. The source code of the routers operating system and other software components are open.

The new router has many more features while coming at a cheaper price. You will only need a screw driver to attach the wiring and connect the router to the 12V on-board power.