As of today vyacht router owners will benefit from the new features introducing the conversion of NMEA 0183 and Seatalk 1 sentences into NMEA 2000/Seatalk NG.

The changes become available with the new firmware version 1.3.30. Most users of existing devices will be able to upgarde to this version to enable the new capabilities.

Previous versions were only listening to the NMEA 2000 traffic. Many NMEA 2000/Seatalk NG sentences (PGNs) were translated into SignalK and NMEA 0183. This obviously continues to work.

In addition the router now also becomes visible to other devices and instruments on the NMEA 2000 bus.

For many users this means that the router now can fully replace NMEA 0183 -> NMEA 2000 bridges and gateways as well as Seatalk 1 to NMEA 2000 / Seatalk NG translators.

Please note: vyacht is commited to openness, sharing and offering value at a low pricepoint. The router's NMEA 2000 capabilities are based on open and publicly available information only. The router is not NMEA 2000 certified and does not aim to be. But it is fully operational in a NMEA 2000 network without disturbing it. Membership in the closed and NMEA vendor group would prevent the openness we aim for. 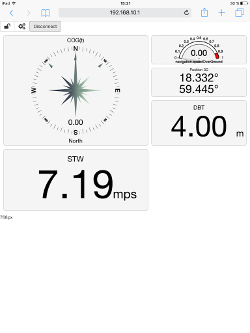 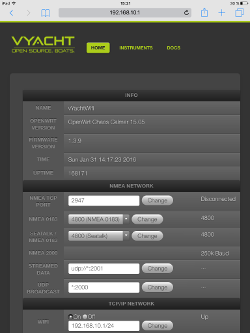 The vyacht router features up to 4 NMEA 0183, 1 NMEA 2000 and 1 Seatalk input and has no limitation on the number of connected devices. All incoming data is now also offered in the SignalK format. Obviously iNavX, iRegatta and all the other apps will continue to work and receive NMEA0183 data as before. Also the NMEA 0183 output will remain unchanged.

The vyacht router runs a modified version of gpsd on OpenWrt Linux at its heart. As I already implemented websockets and REST quite some time ago for debugging purposes it was in the end a matter of adding SignalK JSON output and super simple CORS in C in order to support it.

The full SignalK format is accessible via a REST API and the update format via web sockets. All SignalK and NMEA 0183, as well as the raw and gpsd format is always offered on port 2947. This is reached by simply switching to REST/websockets when such a request comes in.

As of today all new routers will have SignalK pre-installed. Existing routers can be upgraded. Firmware for existing NMEA 2000/0183/Seatalk will be made available this week. A new firmware for the now obsolete NMEA 0183/Seatalk router models with will also soon be available.

Thank you to the great SignalK community for achieving this and enabling me to deliver this in the router!
New Feature
Jan 6, 2016

As of today an optional USB port can be ordered with every router. The hardware works flawlessly. I am running my router now with a 3G-Dongle.

This support is still experimental though because you will need to go down to the command line in order to configure and make use of it. Easy for anyone with basic Unix knowledge.

As of today the vyacht router also supports Navionics SonarChart™ Live. This feature can be enabled via a firmeware upgrade.