Syncing of waypoints between iPad/tablet and plotter

Waypoints on the chart plotter are essential for many. However, managing a larger amount of waypoints as seen here on Raymarine's C-Series display can easily become quite painful and messy. Marine apps on PC or iPad and vyacht come to the rescue and make route planing with waypoints a great evening fun again.

This how-to shows how to transfer waypoints wirelessly to the chart plotter. And how to fetch those created on the plotter back to your iPad.

Managing waypoints on a plotter is often painful - not only due to the lack of a sufficient keyboard to change names. However, most plotters support importing and exporting of waypoints. Waypoint names and routes can then easily be edited on your PC, laptop. A standard method is method is writing and reading a memory card with many manual steps.

It becomes even more comfortable with the vyacht NMEA wireless router. The router allows to sync waypoints directly between your plotter and many marine apps on iPad, tablet, PC and laptop. In this example we use iNavX on the iPad, a C-series Raymarine plotter and NMEA 0183 as communication protocol. The following picture gives an overview over the installation.

You can obviously choose to only set up one of the above directions. The network connection to the router from your PC, laptop or iPad is established as usual and is necessary for both use cases.

After the initial set-up transfering waypoints from iNavX to the plotter is easy. First the plotter needs to be prepared to start receiving waypoints. The following steps need to be excuted on the C-series:

After these steps iNavX is used to transfer waypoints. Go to

The next image shows waypoints being send to the plotter 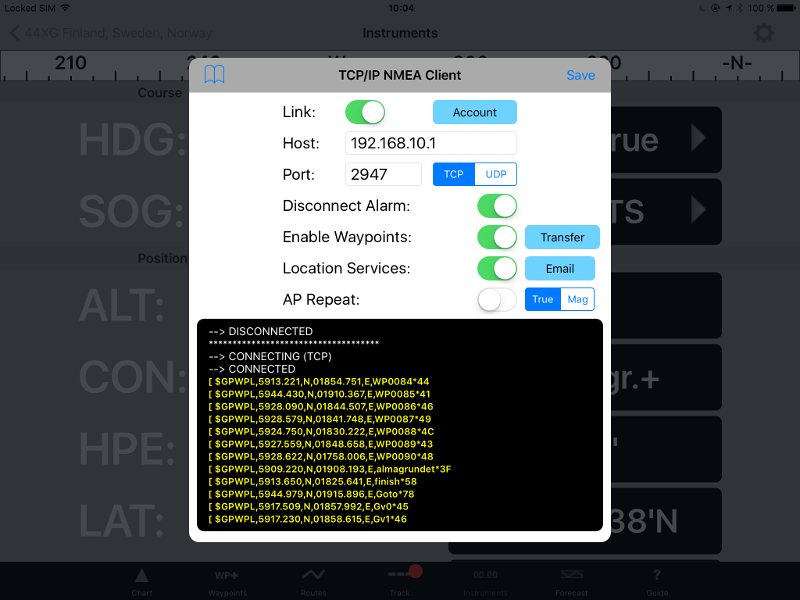 Voila! All waypoints made it to the plotter. One minor bummer: the transfer protocol NMEA 0183 is quite old and does not know anything about non-ASCII characters. As you see there is at least one umlaut in any of the 20 different Swedish words for island. 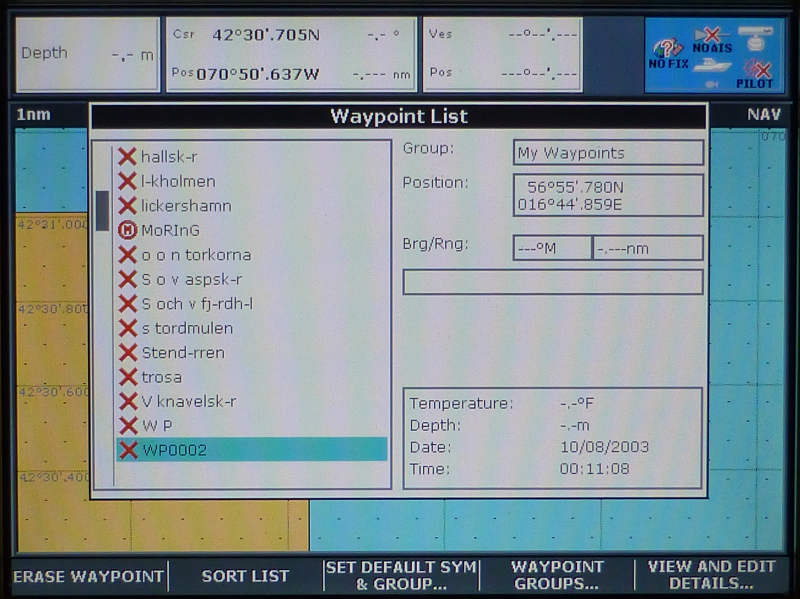 MoRInG and W P are two waypoints created on the plotter and missing in iNavX. Lets see how to get them there. On the C-Series plotter use the following steps. First 3 steps are identical to the above:

If you are still be in the Transfer dialog in iNavX you will see missing waypoints being transfered in the log window: 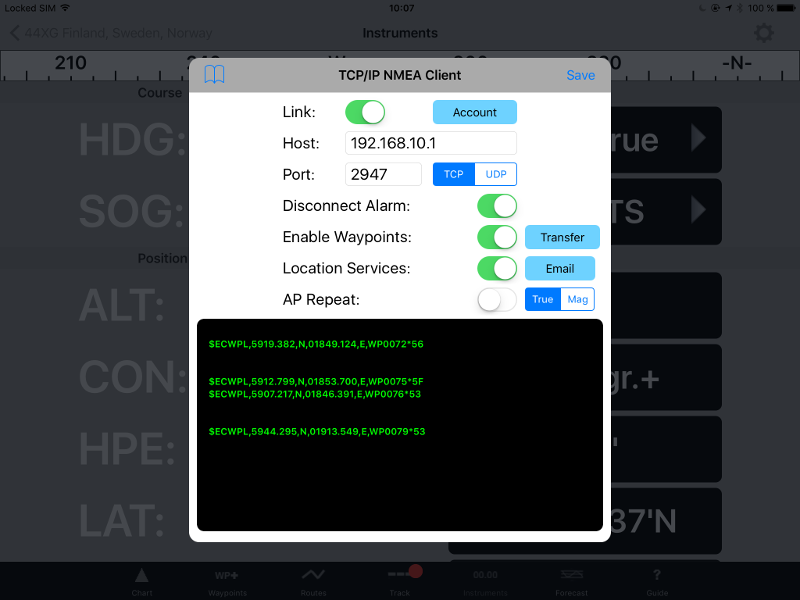 New waypoints made it from the C-series to iNavX. Waypoints with the same name are overwritten. 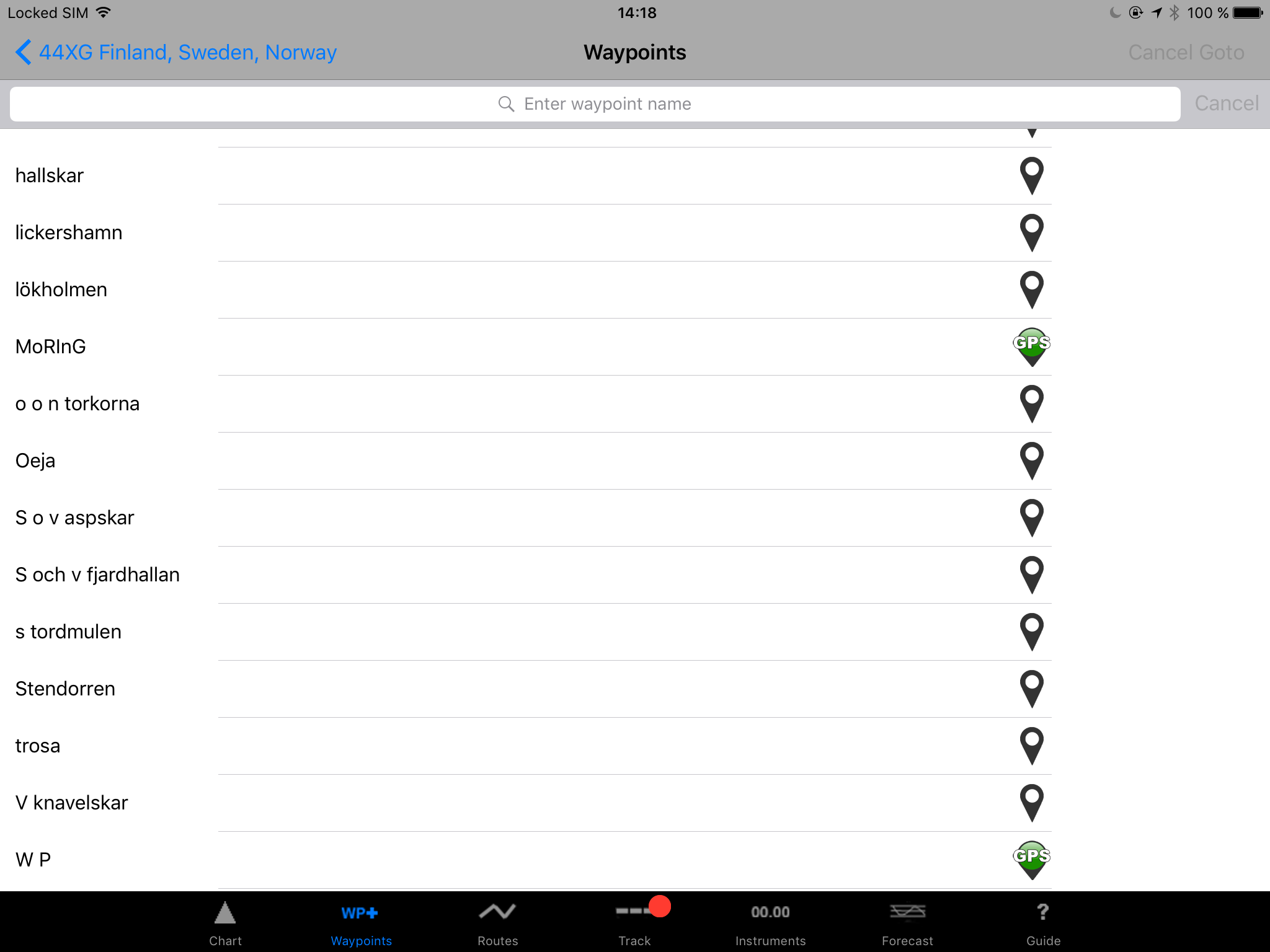 Straight forward and quite simple. The procedure is quite generic and just serves as an example. For most other plotter and charting apps like iSailor its identical or similar.